May 2006. Ed Macy and 656 Squadron arrive in Afghanistan along with the Apache AH Mk 1 on its first operational tour. It’s an unfamiliar combat zone with a limited role for the Apache and Ed’s time is spent escorting Chinooks. But one month later, during Operation Mutay, with 3 Para pinned down in Helmand, the arguments about the Apache’s potential are thrown out and Ed deploys the first Hellfire missile in combat. That squeeze of the trigger changed the war for the British and the Taliban alike. The £4.2bn Apache programme was dramatically redirected to fighting the enemy head-on and turned Ed and his squadron into one of the British Army’s greatest assets.

Ed recounts the intense months that followed Mutay: the steep learning curve, the new missions, the evolving enemy and the changing Rules of Engagement. He also sheds light on his early career as a young paratrooper, his operational baptism as a pilot and how both shaped his ability to fly, fight and survive during that fateful first Afghanistan tour against a cunning and ruthless enemy. It was here, in the dusty wastes of Helmand that Ed, his colleagues in 656 Squadron and the Apache found themselves on trial for their lives and for the reputation of a machine on which the British government had staked a fortune. 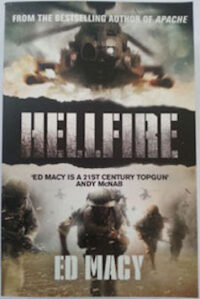