The History of the Chinthe

The chinthe (pronounced ‘chin-thay’), the mythical Ieo-gryph of Burma, guardian of the temples, goes far back into Buddhist and Burmese mythology.  The Mahavamsa, the Great Pall Chronicle of Ceylon (c 500 AD), tells the story somewhat like this:

A princess had a son through her marriage to a lion, but forsook the lion who then became the terror of the land. The son set out to slay the lion. When he found the lion he shot an arrow at him, but so great was the lion’s unshaken love for his son that the arrow rebounded from the lion’s brow and fell to earth at the youth’s feet. Three times this happened. But then the lion grew wrathful; and when the youth let fly the fourth arrow, it pierced the lion’s body and killed him. Thus the lion lost his life because he had lost his self-possession and allowed wrath to pervade his heart.

Legend goes on to say that the son later erected a statue of the lion as guardian of the temple, to atone for this murder. Certainly, the chinthe (sometimes portrayed as half lion and half human) is revered and loved throughout Burma.

It is also a protector, which can pounce on the enemies of religion (ie the State), from nine different directions. Due to this superiority it was used symbolically on the royal thrones of Burma. 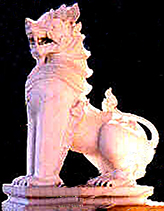 The two chinthes which ‘guard’ the entrance to Burmah Castrol House in Swindon are replicas of those which guard the Shwedagon Pagoda in Rangoon, and are the first ever to be officially exported from Burma. They are 8 feet high and together weigh over 5 tonnes. Before being sent to England they were blessed by Buddhist priests. The chinthes were shipped 10,000 miles to Southampton, transported to Swindon and were hoisted into position for the opening of the Burmah’s Headquarters. U Han Tin, the sculptor, travelled with them to Swindon and helped with the installation. Burmah employee U Saw Shwe acted as interpreter.In 1994-95 the entrance to Burmah Castrol House was rebuilt. After extensive research to see whether the chinthes could be moved, they were enclosed in wooden ‘kennels’ to protect them during the work. The ‘kennels’ had mesh windows so the chinthes could still see out to protect the building.