On Thursday, 23 March 1978, a Change of Title Parade was held at Jersey Brow, Royal Aircraft Establishment, Farnborough. 664 Squadron, which was under the command of Major Chris Pickup, became 656 Squadron. 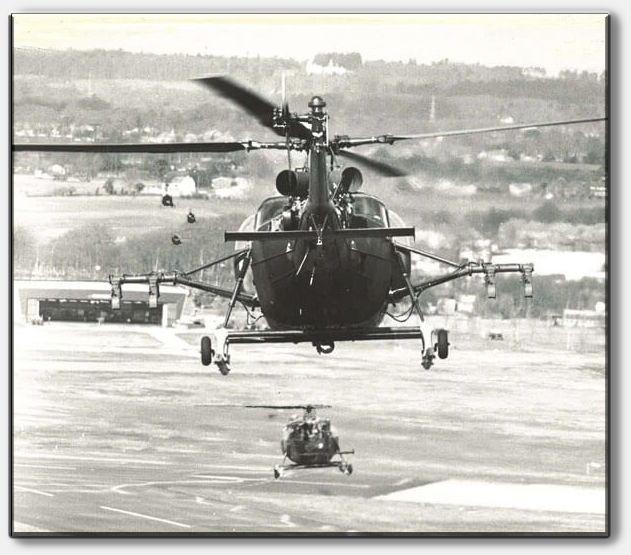 Scouts crossing to the hanger 1982

Farnborough, of course, is one of the cradles of British aviation and had played host to the Army’s airmen since the nineteenth century when the Royal Engineers had first flown their ‘war balloons.’ 664 Squadron had been formed originally in December 1944, as one of three Canadian Air OP units which served in north-west Europe in 1945. 664 Squadron’s immediate antecedent was 21 Reconnaissance Flight, which had been based at Farnborough since 1965, and became an Interim Aviation Squadron in 1968, and then 664 Aviation Squadron in 1969.

In 1973, ‘Parachute’ had been incorporated in to the Squadron title, as most of the aircrew and LAD were trained parachutists and everyone wore the Red Beret. With the disbandment of the Parachute Brigade on 1 April 1977, these entitlements were withdrawn. As the 2i/c, Tony McMahon noted,

‘In March 1977 the squadron exchanged its red berets for the AAC berets on a small parade outside the squadron hangar, with many a tear shed by those who held the para association dear. In fact, there was one REME SNCO who took it so badly that he avoided wearing blue beret whenever he could. I ignored his protest and eventually he came round.’

The Squadron’s primary function in 1978 was the support of 6 Field Force and it consisted of two flights; A Flight with six Gazelles (replacing Sioux from 1 April) and B Flight with six Scouts. The SQMS, Ross Skingley, remembers,

‘The Squadron hangar and offices were situated close to the centre of this large MOD specialist airfield for aircraft and systems testing. There was plenty of room, as the hangar had been designed to accommodate VC10s. During the annual air displays we had a grandstand seat, though it was a little close for comfort should there be a major accident.’

The Squadron was kept very busy during the year, with two Scouts being detached to The Gambia between February and May for exercise with the Royal Anglian Regiment, two Gazelles spending April in Germany, again on exercise, a large field training exercise in Denmark, a visit to Canada for B Flight in September to BATUS (the British Army Training Unit Suffield) and between October and November, participation in a main field training exercise in Denmark. Tony McMahon has fond memories of the trip to Denmark,

‘Exercise Arrow Express proved to be an amazing experience. We self-deployed by air to Denmark, the support elements going by sea. Miraculously we married up over there and proceeded to support the Brigade HQ. As second in command my job was to find a squadron location. I happened upon a wonderful estate and negotiated our occupation with the owner, Ole Molgard Christensen. He made us very welcome, treating the officers to his store of Glenlivet on the first evening and then declared that he would have a dinner party in our honour. He expected that we would have deployed with full mess kit and was very disappointed to discover that we barely had a tie between us.

At the end of the exercise he challenged us to a football match and our boys were slightly nonplussed to discover that half their local team were girls who were not shy when it came to sharing the same changing room. Nobody remembers the result of the game. Our Danish host subsequently became an honorary member of the Squadron.’

The pattern continued into 1979 with two Scout crews being deployed to Belize between January and April. The colony formerly known as British Honduras was being threatened by its larger neighbour, Guatemala and a strong British military presence was being maintained to deter any aggressive moves (Belize attained full independence on 21 September 1981).

One Pilot provided occasional support to the flight based at Dekalia, Cyprus. The flight was equipped with Aloutte’s but due to a lack of qualified pilots on this type it was down to the squadrons only qualified Alouette pilot, Sgt CK, cover leave and sickness as and when required. “It was a rather enjoyable break in the squadrons normal routine” he was heard to say.

Two Scouts and eleven personnel were attached to 660 Squadron in Hong Kong from July to October as reinforcements in the prevention of illegal immigrants. According to Sergeant Dick Kalinski, the job consisted mostly of, ‘Hovering over the Mai Po marshes while the crewman in the back lent out and pulled them in.’ As well as these operational deployments, aircraft were also sent to take part in exercises in Italy, Germany, Denmark, Kenya and the USA.

The Squadron also had to maintain a capability to be ready to support the civil power in the UK should an incident arise, eg. a natural disaster or a strike involving essential services.

In May, Chris Pickup was succeeded in command by Major Stephen Nathan.