From Auster to Apache Hardback Book

By:  Guy Warner,  author of more than 20 books on aviation.
Read reviews of this book here:  Amazon reviews.

The book covers in detail the first 70 years of the Squadron’s history, from directing artillery in Auster light aircraft during the Burma Campaign in WW2, to being the artillery in the air, flying the fearsome Apache Attack Helicopter, in Afghanistan and Libya, with involvement in the Korean and Falklands wars, among others,  in the years between.

It draws heavily on unpublished unit histories, personal diaries, interviews with retired and serving Squadron members, and the extensive archives held by both the Association itself and the Museum of Army Flying at Middle Wallop in Hampshire.

Illustrated by more than 30 colour and 70 black & white photos (many never before published), as well as numerous maps;  the book’s eight appendices include the Squadron’s Roll of Honour, and its impressive list of Honours & Awards.

Commissioned by the Association, we are now able to offer this book heavily discounted from the cover price of £25.00 / US $50.00. 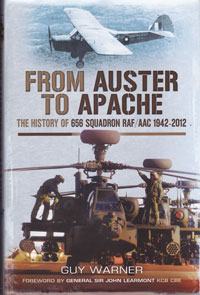 There are no reviews yet.